Cowher Power & The Chin of Win 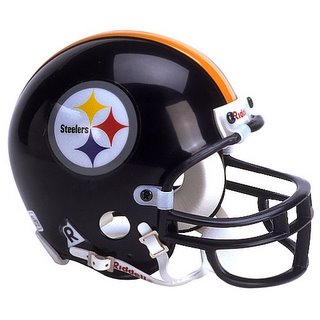 The Pittsburgh Steelers are World Champions and I couldn't be happier. Did I suddenly jump on the bandwagon? Was I placing bets and they won me a wheelbarrow full of money? Do I simply have a lot of black in my wardrobe and thought I could look fashionable at local sports bars?

No, no and my gawd I hate sports bars.

I have impeccable Pittsburgh Steeler credentials and they are as follows:
--- My Dad grew up in Wheeling, WV, roughly 59. 16 miles from Pittsburgh.
--- My father worked in the area in construction for a number of years, thus he worked with the steel industry.
--- I grew up watching all the 70's Super Bowl's with my Dad in his oversized easy chair. Due to my youth, I only remember Super Bowl XIV, but please don't hold that against me.
--- I have been wearing the same Steeler jacket since 1989. It hasn't been washed since the season started.

That should probably do it. I travelled to my Backup Family in the South Bay, who were kind enough to invite me over and have a little Super Bowl party complete with snacks and BBQ.

It was delicious, but so were the results of the game.

Before the game, I made a little bet with my boss who hails from the Seattle. If the Steelers win, he has to do his morning show AND my afternoon show as well. Except for a few daily duties that need to be finished, I had the day off. After Dialysis, I drove home instead of to work and took a two hour nap. Thanks to the Pittsburgh Steelers. 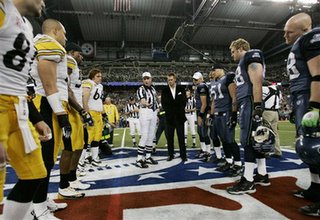 I was highly disappointed by Terry Bradshaw, and to a less extent Joe Montana, for not appearing as they introduced the MVP from each Super Bowl. Joe Montana had 3 Super Bowl MVP's, Terry Bradshaw two. You just know if Terry was there, he would have handled the coin toss. Rumor has it they both wanted an extra fee to appear. I realize Terry has suffered from depression for most of his life and has had a rocky relationship with the city of Pittsburgh, but don't you think the memory of this Super Bowl would have been worth it.

You see that little mass on the ground Terry?? That's a little bit of respect I lost for you last Sunday. Sorry. 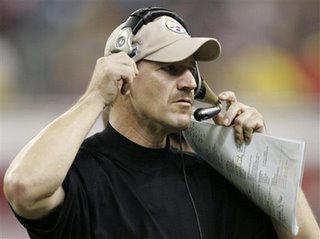 Bill Cowher has always been considered a Great Coach:
--- 14 years as Steeler coach, longest tenure in the NFL
--- 10 seasons he's appeared in the playoffs
--- 8 seasons he's won the AFC North
--- 6 seasons he's made it to the AFC Championship

Most of the time it was the Colts of the Patriots that kept us out of the Super Bowl. God, I hate them so. So Cowher has always been considered a Great Coach. He has just achieved the title of Legendary Coach in my Steeler memory. 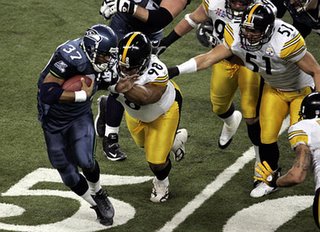 This is Casey Hampton followed closely by James Farrior stopping Alexander from claiming a Super Bowl rushing record. He rushed for only 95 yards on 20 carries. Good average, but not enough to win a Super Bowl. If Seattle and the mega-rich Paul Allen don't step up and pay him what he belives his ego deserves, he'll end up at Washington or Dallas. Whichever one adds an extra "zero" to the paycheck. 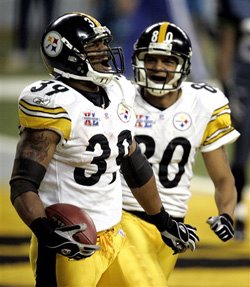 This is Willie Parker, of "Fast Willie" as he's known in the Steelers locker room. Dude is fast. Recommended by a member of the Rooney family, he rushed for over 1200 yards this year. During the Super Bowl, his 75 yard hosing of the Seattle line helped score one of our three touchdowns. Without Bettis next year, his importance for the team will grow immensely. 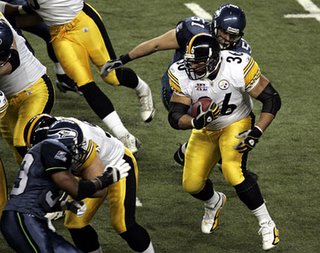 Ladies and gentlemen, the Newly Elected Emperor of Pittsburgh. He only rushed for 43 yards in the game, but the best screenwriter's in Hollywood couldn't have written a better Fairy Tale ending for his career. If he decides to retire in the city of Pittsburgh, he'll never have to pay for another meal, drink, movie ticket or whatever. He runs a number of charitable organizations using his fame, so hopefully he'll continue his post-career life in Pittsburgh. 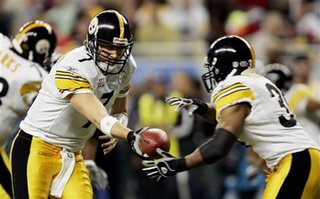 I realize he had a horrific game, but without his composure in the playoffs, we wouldn't have made it to the Super Bowl. Roethlisberger also promised at the end of last season he'd get Bettis to the Super Bowl. Ben has another two or three Super Bowl's in him, I just know it. With a personal record of 27-4, believe it. 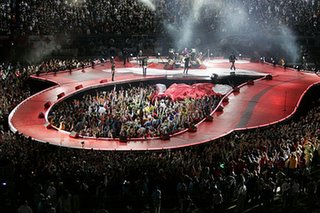 How would you like to tell people this week, "Yeah, I rocked the Rolling Stones tongue!" Ugh. Why can't the Super Bowl Halftime Show be simple? Bring out some of the kids who won the Punt, Pass & Kick competition and let them show off their stuff. Give a couple people a chance to win a new Escalade by kicking a field goal or throwing a touchdown pass. Have the crowd sing "In a Gada Da Vida" in unison. Something, please! But for the love of humanity, stop these ridiculous musical halftime shows. 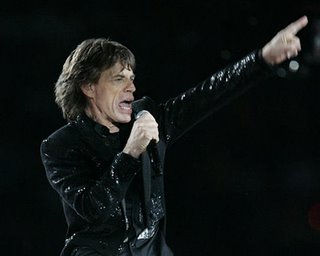 Here's Mr. Rock & Roll pointing in the direction of his badly needed respirator. Or how many minutes until his next heart flutter, you be the judge. 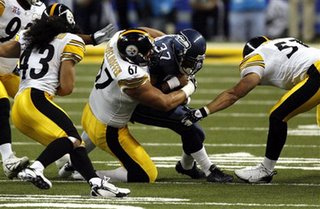 This is Kito Von Oelhoffen, a superior Defensive End, which brings me to one of the more depressing aspects of the Post-Super Bowl spectacle. Free agency. Here's a list of Free Agents, available for picking by other teams after March 3rd:

Out of the preceding list, we NEED to re-sign:

This guy is a multi-purpose WR with great hands and QB skills that is invaluable on flea flicker or option plays. He is priority number one. The Steelers ponied up the money for Hines Ward last year, don't let Randel-El's agent force him to be a holdout in training camp. Do the smart thing: sign him in the offseason and quiet all the speculation.

Over 1200 yards without playing a full season. Another invaluable player who isn't huge like Bettis, but has the speed (as was demonstrated during the Super Bowl) to disappear to the end zone when the line is opened.

Outstanding backup who, if we don't resign him, will be a starter at one of the teams who didn't finish well last season.

A fantastic DE who was a huge piece of the Steel Curtain. Sign him to a new contract before the Bengals, Browns or Ravens show apprecation for this talent. Or pay the price next season with two losses.

Because of the talent of Heath Miller, Jerame Tuman wasn't used as much this season, so I might give him another chance to return. Deshea Townsend and Chris Hope are good players, but they need to step up if they return. Everyone else on the list is second string or had injuries to deal with, so I can't honestly speak about their value to the team. 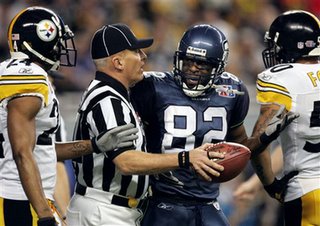 I'm surrounded by Seahawk fans her at work who were railing up and down the hallways complaining and whining. The following is some of their qutoes regarding the game:

"The Steelers cheated, plain and simple."
"The refs were paid off to make the calls in the Seahawks favor."
"The Steelers stole that game and never should have won."

You of course realize, if the Seahawks had scored on either the Offensive Pass Interference call in the end zone OR the missed touchdown in the corner of the end zone near the pylon that was called out of bounds, THE STEELERS WOULD HAVE ALTERED THEIR GAME PLAN ACCORDINGLY.

Sorry. Didn't mean to yell. But Seahawk fans are driving my loopy. 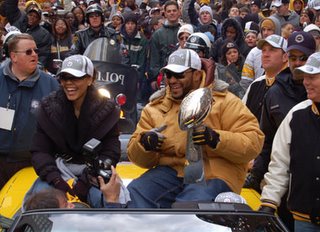 Dallas Cowboys, San Francisco 49ers and now, the Pittsburgh Steelers. Five Super Bowl's and counting. And I couldn't be happier.

And now, after six months of fantastic football, I'm going to wash my Steeler jacket.

Thank you and good night.

Get to Know Stacy

Stacy Without An E
The NoCal Half, California, United States
Words are my favorite playthings in the entire of my existence. I broadcast them daily through antiquated radio waves in an attempt to entertain & enliven. I endeavor to arrange them methodically with the help of my good friends grammar & punctuation. Whether I succeed in either venture is clearly up for debate.